Mr. Gibbs-Smith, claiming to be an expert on Whitehead, wrote a scatheing article about him which was translated into German and published in "Luft- & Raumfahrt" (Air & Space) magazine in January 1982. Since the Smithsonian elected not to publish Gibbs-Smith's monogram on Whitehead and instead stores it very securely, researchers must rely on this this article when responding to Gibbs-Smith's assertions. Excerpts appear below:

Journalistically, the main report (by the Chief Editor) is suspicious because it only appeared four days after the claimed flight and no other regional newspaper reported a word of this allegedly brillient feat, either before or after August 18th - no story, no interview, no follow-up, "no nothing". If the report had been based on facts, the reaction - or rather, lack of reaction - among the diverse and intrepid regional press would have been unique in the history of American journalism. [ ] A flight of even short duration would have made headlines  around the world.

Mr. Gibbs-Smith's denouncement of the veracity of ﻿the report on Whitehead's first flight is predicated on two assumptions:

2. no other newspaper picked up the story.

Both assumptions are wrong.

Ad 1/... The Bridgeport Herald﻿ was a weekly appearing on Sundays. The report was published at the soonest possible date in the next edition, four days later.

Ad 2/... eighty-six contemporary newspaper reports (among a constantly increasing total of more than 300) on Whitehead's pre-Wright flights are currently known. Several included interviews with Whitehead. Many appeared on front-pages. Some of them appeared internationally.

The first machine bore the No. 21, the second, No. 22 - this might have simply been a remodelled No. 21. Except for the steampowered one already mentioned [Pittsburgh] and a glider built in 1897 for the Boston Aeronautical Society, nothing is known about the long series of Nos. 1 thru 20 which presumedly preceded them.

Experts determined long ago, not only written references to but also drawings of many of Whitehead's pre-1901 flying machines exist:

8.  In New York City, journalists from at least six newspapers were present to view

two more machines in October 1897, both with planned motorization.

11. In March 1898, the press published a lithograph of a new machine in Baltimore.

12. In Pittsburgh (1898), he first built a machine which he destroyed when his

benefactor attempted to patent it in his own name.

13. He then built another machine which he and several witnesses claim flew (1899).

14. While in Pittsburgh, he also built a large-scale kite-model of which photos exist

15. Upon arrival in Bridgeport, the press reports him experimenting with another

16. Early 1901, he experimented with a machine which may have been called "No.

That leaves max. four machines unaccounted for (at this time).﻿

In 1901, no one had ever built a successful acetylene motor.

In 1898, three years before Whitehead flew, Frau Liebetanz, General Secretary of the Calcium Carbide and Acetylene Gas Association in Düsseldorf, published a list of three known acetylene motors, one of them in America. (Calciumcarbid und Acetylen, - ihr wesen, ihre Darstellung und Anwendung", Leipzig, 1898). In November 1899, Scientific American published a report about "The Auto Acetylene Company of New York". Its motors could be adapted for use with either acetylene, gasoline or kerosene:

"The motor consists of a duplex engine having four cylinders and two exploding
chambers. There is a valve provided which permits changing from acetylene gas
to gasoline and from gasoline to kerosene oil, so that while the engine is operated
most economically and satisfactorily with acetylene, at the same time other fuels
can be used in an emergency, if supplies of carbide are not readily obtained."

Technical drawings of an acetylene motor in a road vehicle were published in 1899 in Dingler's Polytechnisches Journal, Vol. 7, pp. 111-112.

The invention of an acetylene motor by a German inventor was reported in American newspapers in early 1900:﻿ 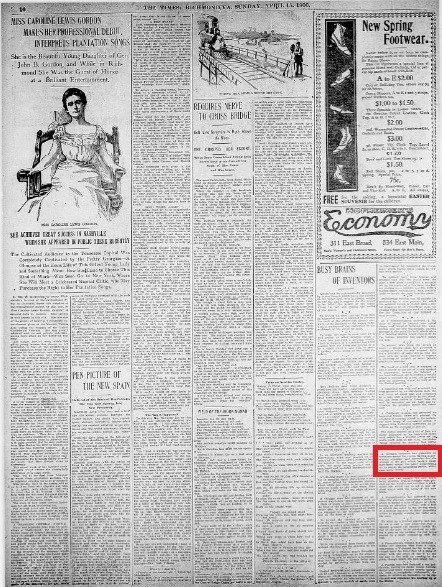 It's hard to understand how Mr. Gibbs-Smith felt able to comment on Whitehead's acetylene power plant when Whitehead always maintained, one of the ingredients of its fuel was a secret known only to him. Scientists at two German universities have since determined the secret ingredient was hydrogen peroxide.

If one examines the photos of the No. 21 more closely, one can determine that it was equipped with a very normal 4-cylinder steam engine. In the clear planviews of the fuselage neither boiler, nor burner, nor fuel container, nor water container nor cooler can be seen.

Mr. Gibbs-Smith may have benefitted from viewing the surviving Whitehead motor before rendering his opinion. He may also have benefitted from knowing how an acetylene motor works and from reading up on the state of the art of acetylene motors in 1901. Knowing the difference between a "motor" and an "engine" as well as between "external" and "internal" combustion might have helped too. Additionally, some background on how two, 2-cylinder motors (one high, one low pressure) can be combined to work in unison, could have lent some credence to his judgement.

Visually and functionally, there isn't much difference between the motors of acetylene and steam powerplants. If the acetylene is brought into the aircraft via a portable pressure-tank (which Whitehead is assumed to have done), some of the benefits are - you guessed it - no need for standard boiler, burner, large fuel container, water container and cooler parts. (Even the Whitehead-critical, German authors Schwipps/Holzer, write that Whitehead's 1901 acetylene motor was probably the same one that used steam in his 1899, Pittsburgh aircraft. [Flugpionier Gustav Weißkopf, p.100])

Mr. Gibbs-Smith refers to "clear planviews of the fuselage". Actually, only one such planview photograph is known to exist. Unfortunately, in that photo the fuselage's contents are in the shadows. So far, even the use of enlargement and high-resolution enhancement techniques has been unable to reveal the fuselage's contents. Incidentally, reseachers applied these techniques to look for steering levers. (Nobody besides Mr. Gibbs-Smith is known to have questioned the utility and appropriateness of the acetylene power plant.)

Furthermore, the Machine No. 21 appears to have been structurally very flimsy, as Manly - Langley's engineer - noted at the time when he heard of Whitehead's machine.

Here, Mr. Gibbs-Smith renders an opinion on the structural integrity of Whitehead's machine. However, what's  "shaky" appears to be more Mr. Gibbs-Smith's

foundational basis and his understanding of the principles of factual argument.

In a Court of Law, both hearsay and speculation are inadmissible. Mr. Manly never saw Whitehead's machine. He "heard about it" from a Mr. Traylor - a technically unqualified, administrative clerk who himself had only seen Whitehead's machine packed into shipping crate. Furthermore, Mr. Manly was building a competing aircraft (Langley's) and had been promised that he would pilot it on its first flight, thus bringing in two grounds for bias.

Rendering an "expert opinion" regarding structural integrity based on such a foundation serves only to disqualify the judgement of the "expert".

It raises the question why there were two motors when the propellers would have been able to propel the machine along the ground, thereby eliminating the dead weight of the wheel-drive motor for flight. The amount of machinery and accessories which was to be installed in that tiny fuselage was schocking: [ ]

d) the device for switching the motor from wheel- to propeller-power [ ];

h) a device for retracting and extending the wings;﻿

Here, Mr. Gibbs-Smith views Whitehead's invention outside of its historical context, judging it as an aeroplane only and ignoring its roadability. However, at a time when no airports or hangars yet existed, no one was trying to invent a machine for flying from one airport to another airport. Manoevring was done on roads where propeller propulsion with wings spread was not a realistic option.

Taking the axes one by one,

- rudder steering (laterally - around the vertical axis) was described in four newspaper reports (1901-08-23, Washington Times, p.2; 1901-08-23, St. Louis Republic, p.6; 1902-01-26, Bridgeport Sunday Herald, pp.4&9; 1901-08-23, NY Sun, p.8) and in an affidavit by Anton Pruckner, the man who helped build it. Pruckner lived to describe it for the Smithsonian's Director, Paul Garber, who did a drawing of it. Prior to installation of the rudder, Whitehead employed weight-shifting and differential propeller power to affect lateral steering.

- aileron﻿-like, wing-warp steering (banking - around the longitudinal axis) was mentioned in an affidavit by JohnWhitehead (Gustave's brother), also in an article written by Whitehead himself in the Dec. 1902 edition of Aeronautical World (see next point, below). The article contains a photo of a kite Whitehead built in 1899, showing wing-warp steering.

- elevator steering (vertically - around the lateral axis) is clearly visible in almost all photos of Whitehead's aircraft and ﻿is referred to by him in many articles and interviews.

Incidentally, Whitehead himself never said one word about wing warping on any of his machines.

Whitehead himself wrote in "Aeronautical World"﻿ an accurate description of the pneumatically-powered wing-warping steering mechanism in his new aircraft (see excerpt below): 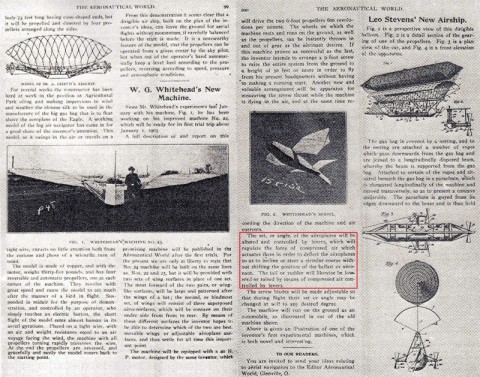 Honesty of the Wright Brothers regarding Whitehead

Translation: (back into English)

"A special point in the Whitehead Case which must be soundly condemned and raises doubts about both the memory of the witnesses and the integrity of the researchers are the witness statements. []

Apart from the fact that noone ever caught the Wrights intentionally being  untruthful, the accusation that the Wrights acquired any type of valuable information from Whitehead may well be one of the most grotesque statements in the history of aviation."

The attached article meticulously documents the great lengths the Wrights went to to conceal how they wrongly claimed George Spratt's ideas, methods and calculations as their own.

- dumps Whitehead into a group of sparsely documented claimants

and assures his readers:

2) that he (Gibbs-Smith) has "made an intensive study of these claims", and

3) that others before him concluded the claim was fantasy.

Gibbs-Smith never once contacted any Whitehead researcher (Randolph, Crane, O'Dwyer). He cites only four contemporary newspaper reports in his writings on Whitehead. It's therefore unclear how he could have "made an intensive study".

All persons known to have examined Whitehead's claim before 1970 (Randolph, Crane, O'Dwyer) reached the conclusion, Whitehead had flown first. It's unclear who Gibbs-Smith was refering to when he wrote "others before me have come to the same conclusion that these alleged flights were only flights of fantasy". Was Mr. Gibbs-Smith fantasizing?